Realize the Social Equality Between
the Deaf and Hearing

We founded ShuR Group to empower the lives of the Deaf.
Our mission is to realize a society in which the Deaf are not forced to give up their dreams because of their hearing disabilities.
We have developed our IT services focused on sign language driven by our vision of
“Tech For The Deaf” 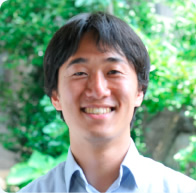 Junto was born in Gunma Prefecture in Japan, 1987.

B.A. of Arts in Environmental Information at Keio University.
He was attracted by the intricacies of the Japanese Sign Language （JSL） and started to learn it independently while at college in 2007.
His interest grew, and he started volunteering to create movies in JSL after noticing the lack of entertainment choices for the Deaf.
He founded ShuR Group in 2008, after realizing that there wasn’t significant infrastructure around sign language that would enable the Deaf to participate in society. The company offers an interpretation service via video chat （VRS）, as well as a crowd-sourced online sign language dictionary with the goal to “realize the social equality between The Deaf and the Hearing.”
Junto was selected as the first Ashoka Fellow in East Asia, and the first Japanese Forbes 30 Under 30. In 2016, he won the first Rolex Award Young Laureates in Japan. Junto is a Global Shaper of the World Economic Forum, and has spoken at TEDx Tokyo in 2012 about his work.
He obtained a Japanese Sign Language Interpreter license from the Ministry of Health、Labor and Welfare in 2013

Remote interpretation service for Sign Language to spoken word (and vice versa) is delivered on various devices such as tablets, smartphones and PCs anytime and anywhere.

ShuR offers Sign Language Interpretation for various types of interactions e.g. buying tickets at a train station, business inquiries at a commercial facility, or an appointment in a government office. This service is also available for brief interactions, as the focus is to facilitate smooth and seamless communication.

ShuR establishes customer desks in Sign Language on behalf of the private companies. These desks are for the Deaf who cannot access the services by telephone.

ShuR provides simultaneous interpretation for Deaf employees in business environments e.g. during internal meetings or conference calls. This service can also be used for speeches, in trainings or in interviews. It allows for nuanced and complex topics to be communicated, and helps promote the career development of the Deaf.

Words, whether spoken or written, can be searched easily online with search engines or vocal input. However, there is no search engine with sign language inputs. The Sign Language keyboard was developed to solve this problem; it consists of the possible hand formations and positions in sign language, so users are able to search based on sign language.

“When new spoken words are introduced for proper nouns or terminology, it can take a long time for the appropriate sign to be created and agreed upon. SLinto allows users to shorten the time by crowd-sourcing new signs that the whole community agrees upon”

Since every single user can add sign language words on SLinto, there are occasional incorrect signs or more efficient signs that could be used instead. All SLinto users can evaluate and comments on the signs within the database, so the accuracy of the dictionary is definite, and can be continuously improved.